at 5:43 PM
The following Security Council press statement was issued on Tuesday March 27, 2012. The Council called upon the Sudan and South Sudan to "exercise maximum restraint and sustain purposeful dialogue". 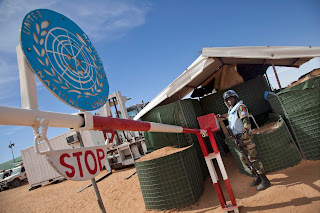 “The members of the Security Council are deeply alarmed by the military clashes in the region bordering Sudan and South Sudan, which threaten to precipitate a resumption of conflict between the two countries, worsen the humanitarian situation, and lead to further civilian casualties.
The members of the Security Council call upon the governments of Sudan and South Sudan to exercise maximum restraint and sustain purposeful dialogue in order to address peacefully the issues that are fueling the mistrust between the two countries, including oil issues, violence in the border region, citizenship, and Abyei.  The members of the Security Council call upon Sudan and South Sudan to respect the letter and spirit of their February 10 Memorandum of Understanding on Non-Aggression and Cooperation.  They urge both countries to utilize the upcoming session of the Joint Political and Security Mechanism to defuse tensions along the border and take appropriate steps to operationalize the Joint Border Verification and Monitoring Mechanism.