Amos: One Million Syrians in Need of Assistance 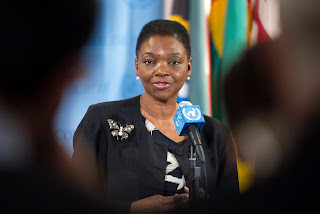 In this letter, Valerie Amos, the UN Under-Secretary-General for Humanitarian Affairs and Emergency Relief Coordinator, told the Security Council member states today that "at least one million Syrians are in need of humanitarian assistance". This figure is based on the Government-led humanitarian assessment joint mission's report in Syria that was concluded on 26 March 2012.
"...
Further to my previous updates, I would like to inform you that the Government-led humanitarian assessment in Syria was concluded on 26 March, as anticipated.
Technical staff from eight United Nations agencies participated in the assessment, as well as three staff from the Organisation of Islamic Cooperation (OIC). The assessment team visited Aleppo, Ar Roqqa, Dara’a, Dayr Az Zor, Hama, Horns, Idlib, Lattakia, Rural Damascus and Tartous Governorates. Information was gathered from civilians, Government authorities, religious and local community leaders from all political views, representatives of the Syrian Arab Red Crescent (SARC) and local NGOs. While some areas could not be accessed due to ongoing insecurity or time constraints, United Nations and OIC staff were able to visit opposition held neighbourhoods on several occasions during the assessment.

Thejoint analysis of the United Nations and the OIC, which the Regional Humanitarian Coordinator has already shared with the Government of the Syrian Arab Republic, indicates that at least one million Syrians are in need of humanitarian assistance across the govcrnorates visited by the mission. Those in need include people directly affected by the violence, who were injured or displaced and lost access to essential services, as well the families hosting them. It also includes people whose vulnerability has increased considerably during the past year due to the impact of violence. It may be months, perhaps years, before the situation retums to normal, regardless of any political or security developments.
The mission did not look into the situation of about 600,000 mainly Iraqi and Palestinian registered refugees, or migrant workers in Syria. However, should the security and economic environment deteriorate further, it is clear that the situation of these already vulnerable people will become even more precarious.
While more in-depth sectoral assessments and monitoring will be required in the coming period, priority needs identified during the assessment include food, medical assistance, non-food items (N Fls), education and protection.
In line with the conditions of the United Nations participation in this assessment, following a request by the Humanitarian Coordinator, the Deputy Minister of Foreign Affairs of the Syrian Arab Republic approved the delivery of assistance, as long as it is coordinated with the SARC. An initial convoy carrying food, NFls, and hygiene kits for 2,000 displaced families leit Damascus for Tartous Governorate on 28 March. Distributions are expected to begin on 30 March and further distributions are planned in other locations.
It is already clear that the limited capacity currently available in Syria will not be sufficient to address all the needs identified during the assessment. I have therefore asked the Regional Humanitarian Coordinator, Mr. Radhouane Nouicer, to facilitate coordination and leadership in Syria following the departure of the current Resident and Humanitarian Coordinator. In particular, he will coordinate with the Syrian authorities the strengthening of humanitarian operations in Syria. In the meantime, United Nations agencies will pre-position relief items and establish steady pipelines. A response plan that captures our planned activities in Syria and in neighbouring countries will be finalized and shared with you shortly. I would encourage you to contribute to the newly established Emergency Response Fund so that response activities can start immediately.
Finally, it remains important that humanitarian efforts remain completely separate from any political agenda. The United Nations agencies will continue to ensure the neutrality, independence and impartiality of their action throughout the response.
Please accept, Excellency, the assurances of my highest consideration.
Valerie Amos
Under-Secretary-General for Humanitarian Affairs
and Emergency Relief Coordinator
Follow me on Twitter @NabilAbiSaab
Posted by Nabil Abi Saab
Email ThisBlogThis!Share to TwitterShare to FacebookShare to Pinterest